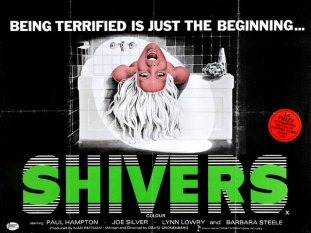 On the first episode of Dead Ringers, Nolan McBride is joined by Ben McBride, Horrorella, and Paul Farrell discuss David Cronenberg’s Shivers (1975) and James Gunn’s Slither (2006). The hosts share their personal horror movie recommendations and discuss what horror they’ve been keeping up with before dissecting this episode’s double feature of parasitic slug movies.

As will always be the case with this show, be aware that our discussion contains spoilers. If you want to watch the movies before listening to the show, Shivers is available to stream on Amazon Prime, and Slither is available for rent on various VOD platforms (Amazon, YouTube, VUDU, iTunes, Google Play) and available to purchase on Blu-ray from Scream Factory (or via Amazon).

Dead Ringers is now available on iTunes. Subscribe and leave us a review if you enjoy the show!

Sources cited and/or used as research for this episode: