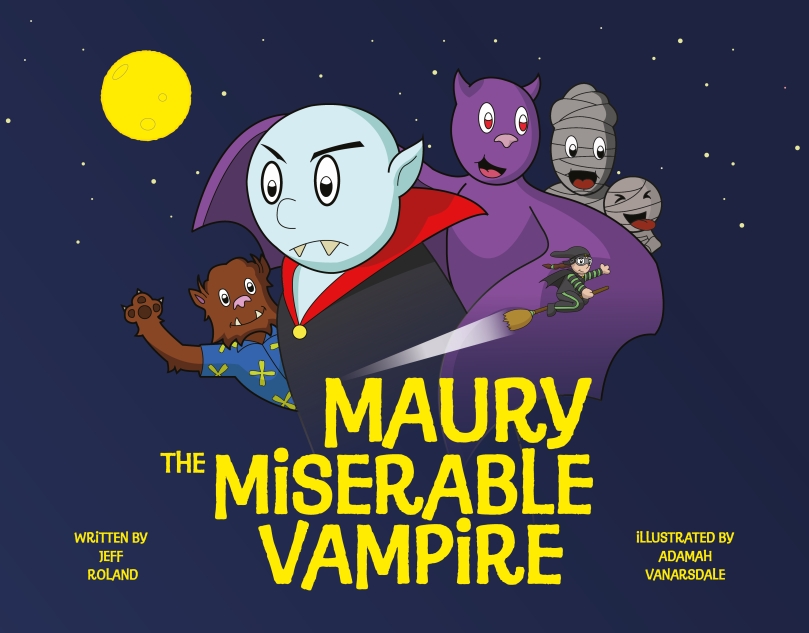 I don’t usually review books, but, like the titular character of today’s topic, I’m going to try something a little different. Maury the Miserable Vampire is a children’s book that I wish had been around during my childhood. When I was a kid, horror-themed children’s entertainment wasn’t easy to come by — especially during the 11 months out of the year that didn’t revolve around Halloween. The closest I got to a book like this when I was young was probably the Bunnicula series, but even that (while rad) was for an older audience. In a market fully dominated by Pokey Little Puppy and whatever that thing in the Little Critter books was, there was a definite gap when it came to vampires, werewolves, and the supernatural.

But you know what? Vampires have things to teach kids too. Which brings us to Maury the Miserable Vampire. Maury is the grumpiest of vampires who sulks around his castle every night, never going out or doing anything new. When his best friend, Barry the Bat, suddenly disappears one day, Maury is forced to go out into the world in search of him. He travels far and wide in his quest, exploring new places and meeting a wealth of new friends. Over the course of his journey, he learns the importance of friendship and finds the courage to try new things.

When we first meet Maury, he is a very insulated character. Aside from his generally grumpy disposition, he sticks to the familiar — staying inside the walls of his castle and relying on Barry for companionship. He is comfortably set in his ways and doesn’t feel the need to expose himself to anything new. When his only friend vanishes, he knows that he must go out to look for him, but the prospect of doing so is daunting. The world is much bigger than the comfortable space that he has made his own, and the prospect of going out into it is intimidating for Maury. But he gathers his courage and faces his fears, leaving his home in search of his friend.

His search takes him across the globe, where he meets a variety of different monsters. His new friends welcome him with open arms and teach him a bit about themselves. He meets witches in the middle of a broom race, mummies telling each other stories, and werewolves communicating with each other through their howls. Maury is able to overcome his anxiety over the unfamiliar and is actually able to have fun with his new friends. He learns that the new and different doesn’t have to be scary, and that monsters from all over the world are happy to be his friends and to share their culture with him.

The book is a ton of fun to read and has some great illustrations. I particularly loved the pictures of maps detailing where all of the different monsters live across the globe. Granted, I don’t have kids, but I’m pretty sure six-year-old me would have been pretty into this book, just as grown-up me enjoyed it. It’s really cute, sports a variety of entertaining characters, carries a good amount of humor, and has a protagonist that is both easy to identify with and who grows along his journey. In a world where people are trying more and more to convince us that the outside world is dangerous and the people who inhabit it are our enemies, it feels good to have a story that shows the opposite to be true.

Maury the Miserable Vampire is available exclusively through the book’s website. Shout out to writer Jeff Roland and illustrator Adamah Vanarsdale for their great work. If you have kids, I highly recommend you pick up a copy. And if, like me, you don’t have kids and are just a horror nerd who likes new and fun things, I also suggest you pick up a copy and join Maury on his adventure.