One of the highlights of the inaugural North Bend Film Festival, Nicolas Pesce’s sophomore effort is a twisted game of cat and mouse as two equally disturbed characters try to navigate a bizarre encounter that only gets stranger as time goes on. If you enjoyed The Eyes Of My Mother, you’re in for a treat.

Based on the novel by Ryu Murakami, Piercing tells the story of a burgeoning killer — a man with a dark nature and desire and the will to see his fantasy realized. Reed (Christopher Abbott) is a happily married man. He has a wife that he loves, an infant daughter he adores, and a good job, but his attempts at normality have had a disappointing effect on his bloodlust. He fantasizes on a regular basis about killing another person, and has finally decided to make this fantasy a reality. His hope is that with this one act, he will simultaneously satisfy this long-standing urge and drive it away.

He leaves home for a few days and checks into a hotel under the auspices of a business trip. He has everything planned out and even rehearses it — how he will call for an escort, how he will invite her into his room and offer her a drink. He even practices the unassuming banter that the two of them will share. He plans, under the guise of BDSM, how he will tie her up and how he will use the chloroform to render her unconscious, before dragging her into the bathroom and stabbing her with an ice pick. He has it all planned to the letter. 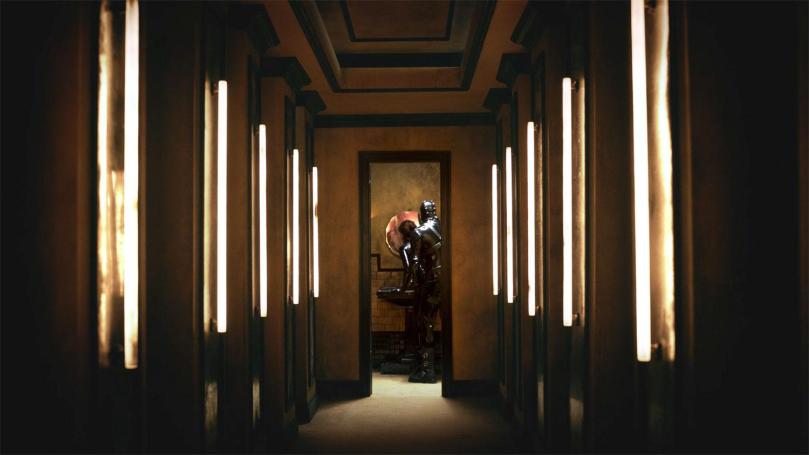 But the best laid plans have no chance of holding up amidst chaos, and that is exactly what he gets when Jackie (Mia Wasikowska) arrives at his room, having answered the call from the escort service. She is a force of nature in her own right, and as their evening strays further and further from Reed’s master plan, he is forced to embrace the chaos, leaving the audience (and Reed himself) wondering if he will be able to pull off the deed.

At its heart, Piercing is a character piece (demented, surely), examining just how and why these two people interact the way that they do. A tense back and forth as we wonder just how close Jackie is to getting ice-picked at any given moment, a good amount of confusion and uncertainty as Reed realizes that despite his planning he actually has no control over the situation in which he finds himself, and a good amount of will they/won’t they mix together and give this film a delightfully tense feel. It’s even playful at times, as we see the pair flirtatiously sparring. We enjoy their interplay while at the same time wonder with both fear and fascination exactly what will transpire next.

Pesce once again creates a world that is steeped in a unique feel and personality. An equally beautiful, but sharp contrast to The Eyes Of My Mother, Piercing is bathed in rich colors and features a stunning 70s look. The score is incredible — complimenting the scene perfectly and invoking every giallo you have ever loved. The visual style and the music combine to make the film ever so slightly surreal, while still leaving it grounded in reality.

Piercing is a twisted delight. Pesce gives us a story that is tense, gory, funny, and even perhaps a little charming, while never forgetting the fact that it is monstrously fucked up.