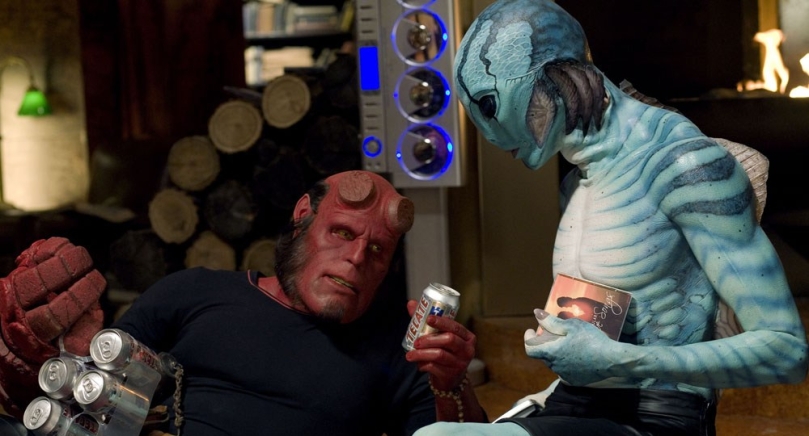 There’s a moment in Guillermo del Toro’s Hellboy II: The Golden Army that fills me with joy like no other. Hellboy (Ron Perlman) and Abe Sapien (Doug Jones), both lovesick, sit together in the library of the Bureau of Paranormal Research and Defense (B.P.R.D.) and drown their sorrows with beer and sappy, soft rock love songs. Each character is facing his own romantic dilemma and is unsure how to proceed — fearing the worst, but hoping for the best.

Hellboy is concerned that his relationship with fellow B.P.R.D. agent Liz Sherman (Selma Blair) has become strained to the point of falling apart. Abe, on the other hand, is trying to understand and figure out how to express his feelings for Princess Nuala (Anna Walton), who has recently found sanctuary at the bureau’s headquarters.

“You fell for the princess?” Hellboy asks, incredulously.

“She’s like me,” Abe responds. “A creature from another world.”

This line summarizes what sets the characters in Hellboy apart from the world that surrounds them — they just don’t fit. This truth is harshly illustrated earlier in the film when Hellboy fights the forest elemental set loose by Prince Nuada (Luke Goss). Despite destroying the creature, saving the city, and protecting a baby, the gathering crowd turns on him.

This angry, off-camera voice could easily be the voice many of us have experienced inside our own heads. These films tap into the part of each of us that fears we will never be accepted for who we truly are. Through the struggles of Hellboy, Liz, and Abe, we see the parts of ourselves we have trouble accepting — the parts we assume the outside world will immediately reject. Like these characters, we all feel like outsiders at one time or another (if not more often). We feel set apart from the people around us and unable to find our place, that voice in the back of our mind telling us we never will. But we see ourselves reflected in these characters and find hope in their journeys.

The son of a demon, and very obviously not human, Hellboy’s differences are difficult to hide. His red skin, horns, and the Right Hand of Doom make it very clear that he is “other.” Having spent the majority of his life hidden away in the B.P.R.D., Hellboy longs to walk the streets of New York freely and be accepted.

Throughout both films, he has rebelled against the bureau’s policy that he remain invisible and that the truth of his existence be kept under wraps. In The Golden Army, Hellboy allows himself to be blown out of a window while on a mission, plummeting to the street below in full view of the pubic. In letting this happen, he finally rips away the curtain and confronts the world head on. Sadly, the world is not as welcoming as he hoped it would be. While people were initially excited to see proof of Hellboy’s existence, they are quick to jeer and insult. Unable to conceal his otherness and unwilling to live a life that obscures his existence, Hellboy finds himself trapped between two worlds.

Like Hellboy, Abe Sapien is a non-human living in a very human world. Despite his vast knowledge and psychic abilities, he stands apart from the modern era. As an amphibious, yet humanoid creature, he is a relic from a long-past age, the last of his kind. Though Abe has always appeared more comfortable with the circumstances of his solitude than Hellboy, meeting Nuala shines a different light on the situation. Part of his attraction to her is rooted in the fact that she is so different as well — the fact that neither of them really belong in the modern world creates a bond between them. As a result of this budding romance, Abe is forced to confront the idea that being other means being alone.

Over the course of both films, Liz grows to accept the thing that others her in society — her pyrokinesis. In the first film, she tries to separate herself from the group and lead a life outside of the B.P.R.D. Part of that life includes denying her true self. As scary and as dangerous as her pyrokinetic ability can be, it is still a part of her. Her attempts to deny it and bury it in the first film are unsuccessful; instead, she eventually learns to embrace it and allow it to be a part of who she is. By the events of Hellboy II, she has learned to better control it, rather than to banish it. Liz remains painfully aware that this power sets her apart from other people, but she has found a way of accepting it within herself.

Though each character feels isolated from the whole of society, they feel togetherness and companionship within the B.P.R.D. and within each other’s company. As Hellboy and Abe sit in the library, slurring the words to “Can’t Smile Without You” and commiserating over their confused feelings, we see a mix of emotion and community, with each character struggling to understand their own circumstances while also relying on the other for support. Their differences may alienate them from them world around them, but it’s those differences that have drawn them together in friendship. 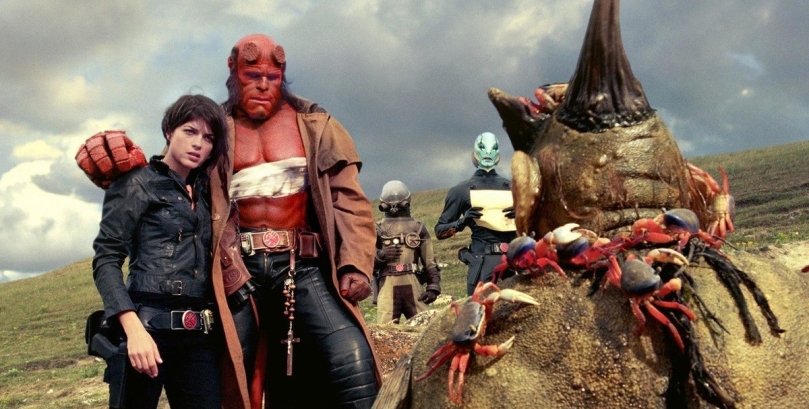 Each character has their own struggles, and their own journey to understand how they fit into the world around them. And that journey taps into that part of us that whispers at every worst possible moment that we will never be accepted. That our perceived flaws are monstrously large and they are the only things anyone notices. That we will never have friends. That we will never be loved. When in truth, these flaws and differences are simply a part of what makes us ourselves.

Hellboy cannot hide what makes him different and is no longer content to lead a life that denies him that personhood. Abe finds comfort in feeling something for a being who appears to be as unique and isolated as he. And Liz has learned to embrace her powers and to keep them under control, rather than deny them. Though the outside world may not fully embrace them with open arms, they have each other. They have found a place and people who do not see their differences as negative, and simply accept them.

Del Toro positions monsters as the heroes of his stories and encourages us to empathize with them. In Hellboy, this speaks to every moment we have ever felt like an outsider. It shows us that despite our flaws, our issues, our weirdness, there is always a place for us. We are deserving of love and friendship and there are people who will see and appreciate us for who we truly are. As we move through this world, as monstrous as we may see ourselves, we find the people who will accept us.

There is a place for all of us beautiful freaks.