Coming to Netflix on April 14, Thriller is an entertaining throwback to the classic slasher era of the 1980s. The directorial debut of writer/director Dallas Jackson (co-written by Ken Rance), the film follows a group of kids in Compton, California who decide to pull a nasty prank on a local boy.

Chauncey (Zachariah Waller) is different from the other kids in the neighborhood. He is awkward and has a stutter, and though we see him as a kind kid, kindness isn’t enough to insulate him from bullying. When the prank goes wrong and ends with the death of one of the kids, the group collectively decides to point the finger at Chauncey rather than owning up to their role in their friend’s death. Chauncey is led away in handcuffs and sentenced to a juvenile detention center.

Four years later, the surviving members of the group are in the midst of their senior year of high school and are preparing for the homecoming dance. Their excitement comes to a standstill when they learn that Chauncey (now played by Jason Woods) has been released from prison and is now back home. The group becomes fearful upon being reminded of the secret that they swore to keep buried, and fear possible retaliation from Chauncey. Nevertheless, it’s Homecoming Weekend and they are determined not to let the past spoil their fun.

Fun is in short supply though, as a shadowy figure begins stalking through the neighborhood on a murderous rampage, hell-bent on seeking revenge for that fateful day four years prior. 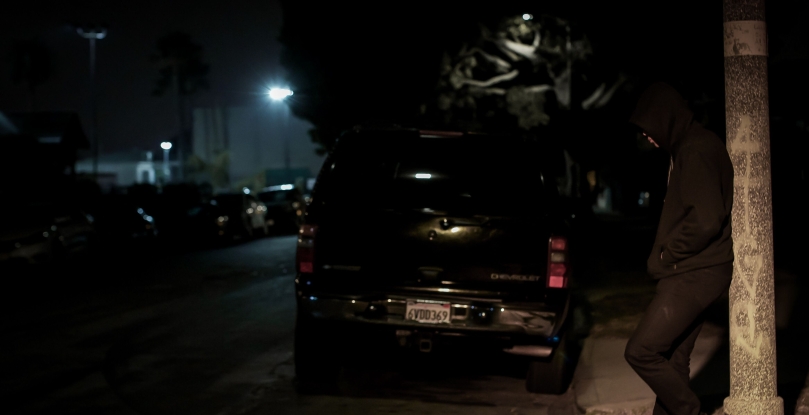 Plot-wise, the film is straight out of the 80s slasher cycle, and Jackson and co-writer Ken Rance certainly know their stuff. The story beats may be familiar, but this is much more than a simple homage. Thriller takes a well-known horror template and places it against an entirely new backdrop. By setting the film in Compton and peopling the story with a diverse cast of characters who live there, Jackson and Rance provide a new and welcome angle that the classic subgenre has been lacking.

What’s more, the background and the reality that these characters face adds something different to the proceedings as well. Though occasionally heavy-handed, Jackson works to remind the audience that the world these kids face is surrounded by threats on a daily basis. Where the wealthy, white characters of Prom Night (1980) have few worries outside of the upcoming dance and the newly-discovered killer, the characters of Thriller have to deal with shootings, police, drug dealers, and the daily life of living in the ghetto. And that fact doesn’t escape them. They are well aware of the reality of their situation and of their own mortality before the shadowy, hooded figure begins stalking the alleys of Compton.

What also helps the film to stand apart from many slashers is the fact that Jackson and Rance take the time to create characters that are more than the high school archetypes they embody. Sure, we have the pretty girl, the jock, the nerd, and so on, but within each of them is a complex character with a distinct personality. We see these kids’ dreams, their fears and their failings. These teens serve as more than just the traditional body count. But don’t worry, they don’t all make it — this is a slasher, after all!

Thriller is a new take on a classic slasher story, approaching the known formula from a new perspective and offering a level of diversity that is often absent from this type of horror film. Not everything lands perfectly, but the strength of this film lies in its understanding of the subgenre and its desire to make it a more inclusive space that everyone can enjoy.

2 thoughts on “THRILLER Review: A New Perspective on the Slasher Formula”