Everyone has interests. Hobbies. Obsessions. To listen to people talk, you’d think it was their interests that defined them. And perhaps that’s true.

Then there are the listeners. The ones on the other side of the table, staring hopelessly forward in the wake of their companions’ words. They internalize them. Swallow the information into the void that is their own lack of passion.

Joe Badon’s The God Inside My Ear is a film about paying attention. Hearing, not simply listening. The story concerns Elizia (Linnea Gregg), a young woman whose world is thrown into chaos when her longtime boyfriend abandons her for a religious cult. The breakup devastates Elizia, sending her spiraling into a maddened state which causes her to question not only her identity but her place in the universe.

The film is is constructed of vignettes, chapters broken down by Elizia’s gradually mounting paranoia. People in positions of power and authority over her are constantly offering suggestions to fix her issues. A pastor on a late night TV commercial barks that God is the answer. A doctor attempts hypnotism. Her friends offer psychedelic drugs. All of them addressing the problem through their own experiences, their own eyes and ears. None address Elizia’s dilemma directly. They listen to her, sure, but they don’t hear her. 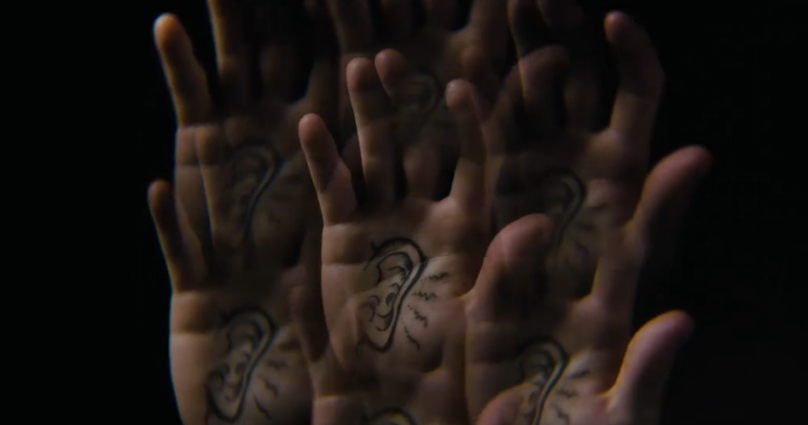 Linnea Gregg’s performance is subtle and subdued, yet darkly haunting. Her work in the role elevates the kaleidoscopic filmmaking and editing choices, allowing the viewer to stay engaged as the narrative jumps from strange images of men in hazmat suits pulling levers to that of strange white-masked strangers in red cloaks closing in. Her journey to identity and purpose is wrought with psychological danger, and it’s Gregg’s performance which roots the heightened anarchic nature of her questionable sanity in something the audience can believe in and relate to.

After all, who hasn’t felt lost? Alone? Confused? Purposeless? Elizia is used to people talking at her rather than to her. She has spent so long ignoring her intuition that when it comes time to listen to herself, the idea is foreign and frightening. Even the psychiatrist she seeks out instructs her to collect something, to seek something to focus on — to find identity in the material, not in the self.

Joe Badon’s script is written with poetic fluorish, words as heightened as the reality Elizia is attempting to navigate. At times the line delivery can seem wooden or unrealistic; however, its purpose in the narrative is clear: humanity’s desire for meaning is an inescapably perpetual existential crisis. All suffer from it. All medicate in their own ways.

Some sedate with words. Others with things. Some use drugs, legal or not, while others find something bigger to believe in than themselves, an entity they can give their minds over to. Then, identity becomes irrelevant. The question needn’t be asked, for the answer is bigger than the self. There are voices, entities, and machinations in the universe that we can never know, never understand, and never control.

Throughout the film, a telemarketer calls to speak to Elizia. His is an omniscient presence, embodied by one of the most impersonal and invasive personas in our world. At one point the telemarketer comments, “Everyone wants to be heard.”

Fitting that it would be the faceless, disembodied voice of a cold sales person, able to worm inside anyone’s home at any given moment, that injects the narrative with its simplest explanation.

The God Inside My Ear dares to listen to those voices in the ether that so desire a friendly ear. Perhaps they are otherworldly. Perhaps they are our own. Either way, the film provides Elizia with the pain required to change and open up to them. To strengthen her inner ear. For, once she stops listening and starts hearing, she is finally able to pursue her purpose.

For what is God…if not a hearing ear?

The God Inside My Ear plays as part of the Philadelphia Unnamed Film Festival. To purchase tickets or badges, or to find more details about the festival, visit: unnamedfilmfestival.com.