The Boston Underground Film Festival hosted the New England premiere of Knife+Heart last weekend, and it is absolutely a film that horror aficionados will want to check out. With his second feature, director Yann Gonzalez has crafted a beautiful, bloody journey into the darker corners of love and obsession.

Knife+Heart is a gorgeous slasher that takes more than a few cues from gialli of the 70s and 80s. The color palette is rich and bold, incorporating a lot of deep reds and blues. Gonzalez takes full advantage of setting his film during the final year of its decade, as the slower, dreamier aesthetic of the 70s gives way to 80s neon. Even the pacing of the story embodies this transition as it progresses slowly at times, but ups the tempo throughout to keep you engaged.

Though beautiful and hypnotic, the film is a bit uneven, particularly in the second act when we follow Anne into the country on a quest to discover more about the killer, following clues that are tenuous at best. Though it gets close to going off the rails at a couple of points, Gonzalez reins the story back in with time for a powerful finale. 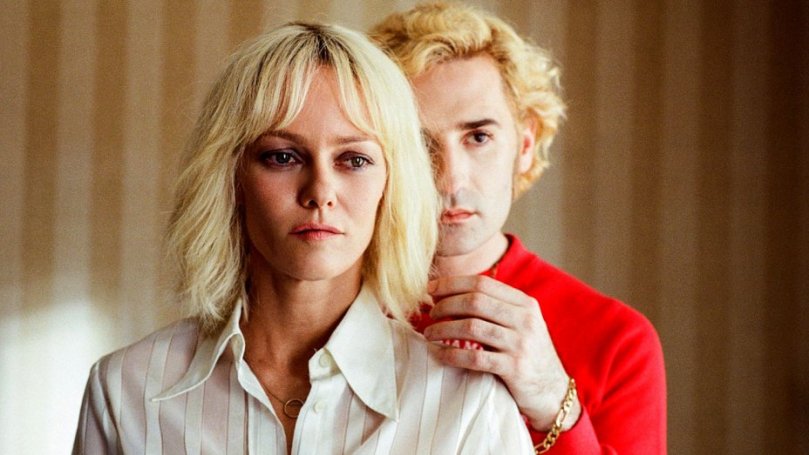 The performances in the film are fantastic, with Paradis in particular standing out. Anne is a lively personality, capable of swinging from elation to misery on a dime. She has formed a family with her actors and crew and is very much at the center of that bond. But as much as that support and love is present, the void left by Lois is noticeable, and we see Anne’s pain manifest in a variety of ways — not all of them good or healthy. Their parting was not mutual and Anne struggles with the fact that, though their love was beautiful, Lois does not want her back. This pain is a constant presence for her as the story unfolds.

Alongside co-writer Cristiano Mangione, Gonzalez has created characters that feel real and lived-in as opposed to just stock, flamboyant set dressing. Though much of the supporting cast has little screen time, Gonzales uses that time wisely and the actors breathe life into the characters and world.

Knife+Heart is a slasher film that walks the line between reality and a dream space. It’s a beautiful work that encapsulates human emotions as easily as it does visual horror, and uses both aspects to tell a story that can be both thrilling and heartbreaking. Its pacing won’t be everyone’s bag, but if you are willing to settle in and let it take you on a journey, the result is a remarkable piece of horror cinema.