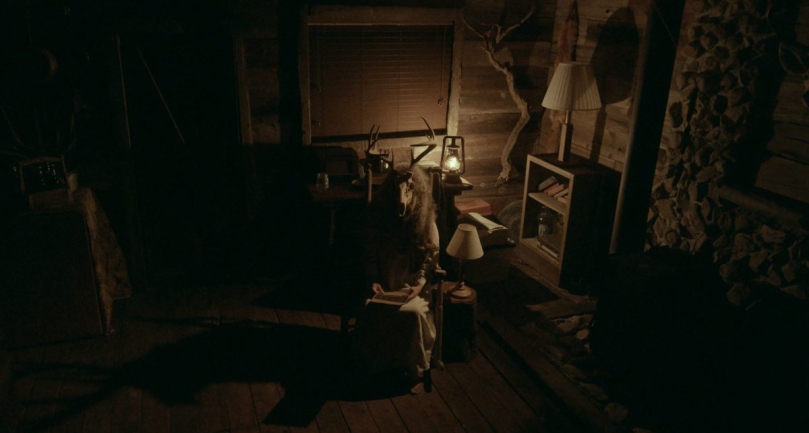 A weathered old woman appears in the center of the cropped, black-and-white frame. She’s rambling, intent to inform whomever is listening about the Sator, the originator of the voice she has heard throughout her entire life. The voice which has advised her. Guided her. Loved her.

In short order, the frame expands and the world is presented in full color. The film returns to that confined opening style periodically throughout, offering glimpses into the old woman’s deteriorating psyche — be it by dementia or this Sator, I cannot say. Each session is a reminder that the mind itself is humanity’s most powerful asset…and its most vulnerable weakness.

The Sator — written, directed, edited, scored, and shot by Jordan Graham — is an expertly crafted exercise in atmosphere. The narrative is as sparse as the otherworldly woods which its protagonists inhabit. Still, there is much more to be gleaned from the actions, expressions, and reactions of the characters than any bit of dialogue or exposition could ever hope to deliver.

Most of the film concerns itself with Adam (Gabriel Nicholson), grandson to Nani (June Peterson), the rambling old woman from the film’s opening. He’s a stoic man, living a secluded life in the woods with his dog. He’s searching for something. He spends his days checking deer cams and blowing on a strange sounding whistle. His past is made up of trauma and loss. The mysteries of his past haunt him, manifesting mentally and physically as he becomes more and more enveloped in the dark world of the ever-deepening woods.

Adam often listens to old recordings of his family’s cult-like musings while checking the empty images captured on his cameras. They speak of “submission,” “trust,” and being made “pure.” Juxtaposed against these quiet moments of reflection are recurring images from the forest. Striking visuals which contrast light and dark in a provocative, unsettling display of encroaching horror.

One image in particular shows a fire crackling in the distance as jet black trees tower above, silhouetted against the navy blue night sky. Is the fire a comfort or a warning? Is it there to welcome or lure? A mystery burning in the night, drawing Adam into the vast wilderness with no promise of safety or satisfaction, but an answer to a question all the same.

Shadows permeate every moment of the film. A creeping darkness looms in every shot regardless of whether the scene takes place among bright, sunlit trees or inside a dim cabin at midnight. More than just an engrossing visual style, the striking imagery amplifies Adam’s paranoia, suggesting that there is more out there than can be seen or discovered by the naked eye.

Based on true stories from his family’s history, Jordan Graham’s work is intensely intimate. He brings the world of the film to life with handcrafted detail and immense care, showing an adeptness for visuals that widens the overall scope and renders the limitations of the budget moot in the eyes of the viewer. The story takes the time it requires to be told and pays massive dividends along the way. After all, the truth behind what is out there in the woods offers more than simply an explanation, but a way of life.

The Sator is a masterful cinematic excursion into the sort of dread that can only be born out of emotional turmoil and familial obligation. Guided by Jordan Graham’s steady hand, the film weaves in and out of its bold and enthralling visual landscape to lead the viewer down a road that never feels safe or easy. It’s the sort of film that deserves to be seen, discussed, and spread in the hopes that the horror genre at large absorbs its lessons and becomes all the better for it.

The Sator traverses the shadows of the mind and the world it inhabits in an effort to understand the dark paths humanity sometimes wanders. Some go willingly, others by design, and others still by force, but all have their reasons. Is the Sator real? Is it a fabrication? That’s for the viewer to decide.

A weathered old woman suffering from dementia fills the constricted frame. She rambles, forgetful and at times listless, but certain of one thing. The Sator. It’s someone she remembers. Someone she can hold onto.

The images which pepper the opening sequence are a mixture between the mundane and the ethereal. The perfect dichotomy to represent the nature of The Sator, a film which asks the viewer to both submit to and constantly question the nature of its titular entity.

A film which pulls on the mind, its strengths, its weaknesses, and everything in between.