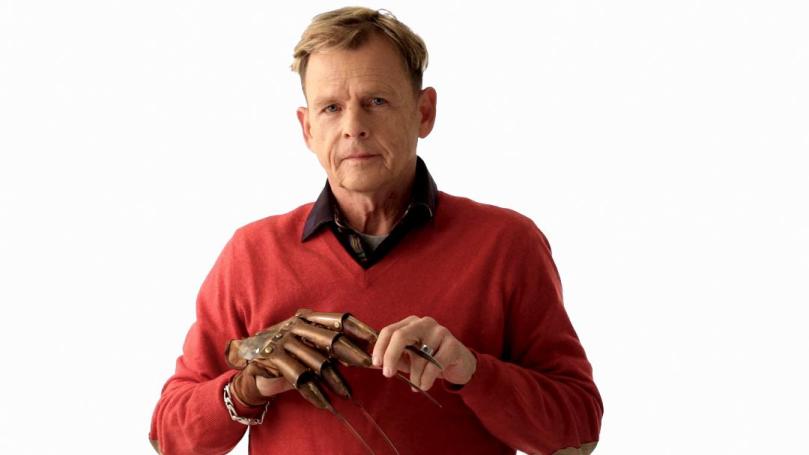 As my body has become fully assimilated into the world of movies and soft pretzels with queso, so too have my days become increasingly more difficult to define. I no longer am able to distinguish between night and day — all is a series of slowly dimming lights as I attempt to eat tortilla chips softly during the quiet parts of whatever movie is playing before me. Still, the rewards I reap are far greater than the generally overrated grasp of time and space that most people have access to. Take Sunday, for example. Here’s what went down. 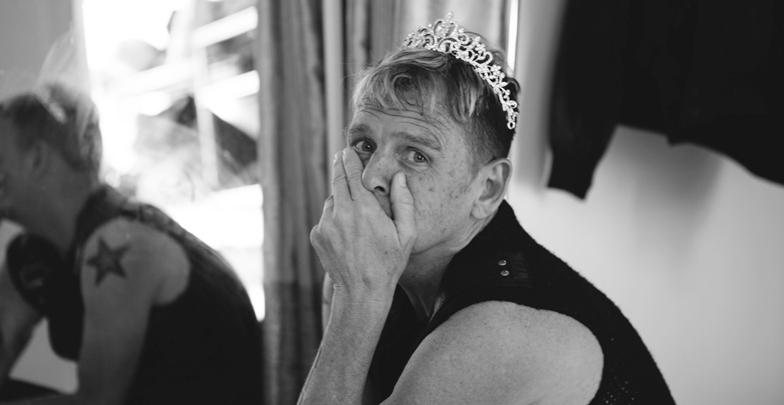 Before heading into the new documentary on Mark Patton and his experiences working on A Nightmare On Elm Street 2: Freddy’s Revenge, I got to witness my first live podcast recording, which turned out to be a blast.

For those unfamiliar with the show, Horror Queers is a weekly podcast on which hosts Trace Thurman and Joe Lipsett analyze horror films from a queer perspective, whether uncovering a hidden subtext, highlighting a certain camp quality, or simply sharing their personal reactions. It’s an uproariously funny, engaging, and incredibly informative show that I highly recommend checking out.

For this episode, Trace and Joe brought ANOES2 stars Mark Patton, Robert Rusler, and Kim Myers to the stage to discuss their experiences with the movie and the documentary. The conversation was candid and went to some interesting and emotional places. Trace and Joe navigated the tumultuous waters of Mark’s experience, and desire to control the nature of the conversation, with grace and charm.

The talk provided insight into Mark’s true feelings about his experience with the Nightmare franchise and his overall dissatisfaction with not only being at the epicenter of many cruel jokes about his sexuality, but with the injustice regarding how the creators of the film have treated him over the years. It was the perfect primer heading into the documentary and provided a great deal of context for what I was about to see.

Directed by Roman Chimienti & Tyler Jensen, Scream, Queen! My Nightmare On Elm Street is less a documentary about the Nightmare franchise sequel in question and more an examination of what it was like to be a closeted gay actor in the 1980s. The film tracks Patton’s journey from his conservative hometown all the way to the Hollywood Hills, shedding light on his drive, ambition, and crippling fear of being outed and subsequently destroyed in the court of public opinion.

It’s a deeply personal journey that considers the impact that ANOES2‘s creators had (whether intentionally or unintentionally) on Patton’s exodus from Hollywood, challenging those with power to own up to the ignorance that they feigned regarding the movie’s queer-leanings, as well as the blame they laid at Patton’s feet for the movie being both disappointing and “gay.”

The documentary shows Mark confronting his demons and coming to terms how he was treated during the making of ANOES2 by director Jack Shoulder and, in particular, writer David Chaskin. Though it’s great to see Mark finally standing up for himself after so many years, it’s unclear whether the explanations and apologies he received from Shoulder and Chaskin are satisfactory (if they even can be).

The film worked on the whole, and while I think the conclusion was a little too “Hollywood” for my tastes, it’s still a fascinating look at an important social issue that remains a problem today. No one should have to be afraid of who they are and I’m glad there are people like Mark Patton out there standing as a beacon for being gay, proud, and vocal about his experience.

In the opening moments of Synchronic, Steve (Anthony Mackie) explains his thoughts regarding time, referring to himself as something of an “armchair physicist.” He quotes Einstein, saying: “People like us, who believe in physics, know that the distinction between past, present, and future is only a stubbornly persistent illusion.”

Synchronic is a film about time. What it has meant and what it still means. Living as we do — time passing in a linear fashion — the lessons of the past are sometimes forgotten. The farther away one gets from the past, the more difficult it is to retain its teachings. Be it 10 minutes or 10,000 years, the only thing that tends to matter to most people is the here-and-now, a time which lacks the benefit of hindsight.

Rarely has the concept of time travel been explored with such disjointed realism while still maintaining a sense of excitement and discovery. Much of the film deals with Steve attempting to determine how time travel works, performing experiments (for better or for worse) all in the stead of mastering the method to save someone he loves.

Synchronic is a fun, engaging, and thought-provoking take on time travel, exploring the implications of the past and the lack of foresight many have about their own futures. By making the method of travel a DMT-like drug — a synthetic rushed to market before the FDA had a chance to put a stop to it — the statement of the film is even more palpable.

Often it is the youngest among us who are most vulnerable to time’s harsh march, as capable of understanding its messaging as they are able to be trapped by it. It seems that when one’s time has been short or, perhaps, is running short, that Einstein’s messaging is most apt. It’s then, when the mind is most malleable, that the stubborn illusion mankind has about time is at its least persistent and its most dangerous. Still, if you ground yourself in those you love, your present will always be your future. I’m no armchair physicist, but I do know that.

Norval Greenwood (Elijah Wood) hasn’t seen his father in 30 years. He’s a scared, mousey sort of man; well-kept. He has “kind” eyes, not “raisin” eyes like his father. He seems naive, insulated from the darkness which the world has in store.

Directed by Ant Timpson, Come To Daddy is a film that weaves in and out of its exploitation underpinnings, providing a window into the mind of the abandoned child as well as the wandering parent. The narrative is broken into two halves, separated by a realization which is ultimately more about Norval Greenwood than his father.

The film is intense, careful at times and bombastic at others. The pacing doesn’t fully work, often spending too much time in more intimate moments as opposed to pushing forward to its exciting latter half. It’s infused with offbeat humor that works because it’s uncomfortable, drawing huge laughs from some of the most viscerally disturbing moments.

Overall, the film is strange and intense. It did not fully come together for me, mostly because of the pacing and mismatched tonal shifts which occur throughout. Still, it’s one hell of a midnight movie with plenty of excursions into exploitation that will surely please a crowd looking for it. Norval Greenwood may not seem like the type, but trust me when I say that there might still be raisins lurking behind those kind eyes.