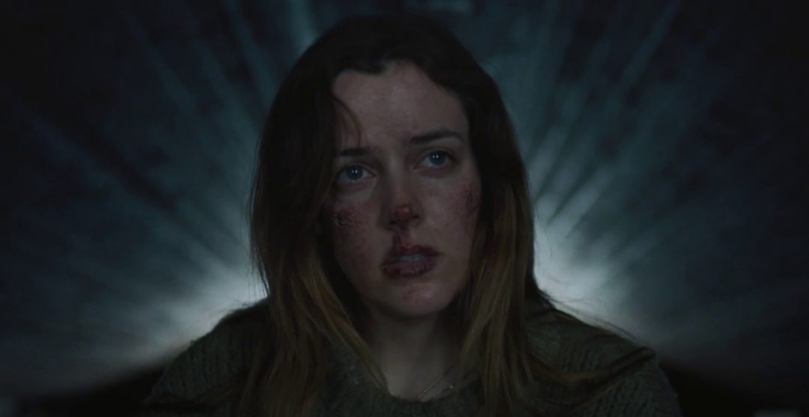 At Fantastic Fest, there were days where movies flowed fluidly in front of my eyes and the only distraction was trying to find the little plastic pen in the dark to sign my receipt for the chicken strips. It was a time full of complimenting strangers on their cool t-shirts and striking up conversations about enamel pins on festival lanyards. Those days…oh, how they were fantastic. By this particular day, a Monday, more than half of the festival was now behind us, but I was still going strong. Here’s what I saw.

Gemma (Imogen Poots) and Tom (Jesse Eisenberg) are just starting out. A teacher and handyman, respectively, they’re happily dating and interested in buying their first home. They’re ready for that next step, ready to take their relationship to the next level and enter into adulthood in the way they know that they’re supposed to. But when a quick visit to a cookie-cutter housing development lands the young couple in a literal prison of domesticity — bound by seemingly endless blocks of bland, identical homes and stuck with a rapidly aging child who they must “raise” in order to escape — they soon realize maybe they weren’t ready for that next step after all.

Vivarium is a science fiction nightmare regarding the dangers of the monotonous, suburban life. It’s a movie steeped in metaphor, a strange deconstruction of the pitfalls of the family unit set against the backdrop of homogeneous suburbia. It’s a shame then that the movie’s execution cannot live up to its ideas.

The film struggles to keep the pace in line with the story, often redundant in its exposition and the physical action onscreen. At times, the protagonists’ characterizations feel suspect, with frequent actions or decisions standing in direct contrast to those from scenes prior. Being feature-length (rather than, say, a short) doesn’t serve any of these issues well and the ultimate payoff of the story barely justifies the journey.

The movie has some fascinating ideas and truly disturbing sequences. Poots and Eisenberg deliver wonderful, heartfelt performances, helping to emotionally ground viewers in the otherwise cold narrative. Still, it didn’t work for me on the whole, feeling more like a segment from The Twilight Zone or Black Mirror stretched out to feature-length than a standalone film.

Vivarium is an interesting experiment, analyzing an inevitability most of us must face at one point or another. Adulthood — taking that next step, getting started — is a tide slowly pushing us forward toward a life that we think we’re supposed to lead. If the movie’s saying anything, it’s this: be careful about making big decisions if you’re not ready to accept the consequences, regardless of what you think you’re supposed to do.

That, and stay the hell away from the suburbs. Trust me, if Vivarium is any indication, you’ll be trapped in there forever.

In The Shadow Of The Moon

Time travel is a contradiction. On the one hand, it’s a proponent of fate, a testament to the inevitability of the universe’s goings on and proof that events will always play out in a specific manner and sequence regardless of any tampering. On the other, it completely defies destiny, positing that with the proper knowledge, one can create the future one so desires.

In The Shadow Of The Moon opens on disaster, a vision of the future where pain and anguish await those helplessly treading toward it. But just as quickly as the smoking city streets of Philadelphia appear, they’re gone, superseded by the same city but thirty-some-odd-years younger and still in tact. We then meet Locke (Boyd Holbrook), a beat cop on the rise to detective and about to start a family. His whole life’s ahead of him, nothing yet written in stone.

The night that follows is one of many we spend with Locke over the course of years, tracking the broad strokes of choices he both chooses to make and is in some ways fated to make. When he encounters a killer with a futuristic weapon that deploys an unidentifiable isotope into its victims’ bodies, he becomes obsessed — not just with solving the crime, but with the frightening truth and inevitability this visitor represents.

Director Jim Mickle puts together a sleek, good-looking thriller, with just enough mind paid to the mechanics of its time-manipulating story engine so as to not draw too much attention to its inconsistencies. While I don’t think the logic really holds up, the story is engaging enough that, coupled with the strength of the performances, it still works for the most part.

The film is big in scope and runs deep in emotion. Still, a question remains at the heart of the time travel’s contradictory nature: how can one hope to change the future when one is tethered by fate? I suppose the answer lies somewhere in the middle, a place of acceptance where the greater good is worth the cost of one’s free will. Choices, after all, are what determine our collective futures. And those choices aren’t just limited to one person, even if they can travel through time.

In The Tall Grass

The natural world around us has the unique ability to be both unremarkably common and staggeringly mysterious all at the same time. Something you’ve seen passing by your car window one hundred times over is indistinguishable in your peripheral vision but might be intimidating were you to be forced to navigate or confront it.

In The Tall Grass plays with that notion, presenting the sort of tall, wavy blades of grass one passes by on the highway everyday as a mysterious, labyrinthine vortex which exists outside of time and real-world logic. The grass is a gateway into the ancient, inexplicable nature of the Earth itself and the secrets it holds that hitherto were only seen chiseled into the walls of ancient caves.

The film follows Cal (Avery Whitted) and Becky (Laysla De Oliveira), a brother and his pregnant sister who are driving cross-country for initially undisclosed and emotionally-charged reasons. While stopped, they hear a child (Will Buie Jr.) calling for help from the nearby tall grass. Once they venture in, the swaying ocean of shifting blades becomes the backdrop for all of the events to follow.

The film looks good, the grass a surprisingly effective visual motif which flows over the frame like water in the ocean. However, the surroundings do get off-putting and repetitive over the course of the runtime, and the lack of logic or reasoning for some of the more inexplicable events of the film draws attention to its somewhat poorly conceived narrative as opposed to drawing viewers into its supernaturally-enhanced terrors.

Patrick Wilson’s Ross Humboldt is the movie’s standout character, a wonderfully devious performance that gets as big as the movie requires. Even under the weight of a convoluted story and somewhat meandering action, Patrick Wilson succeeds and elevates the third act into something far more entertaining than I expected it to be.

Stephen King and Joe Hill are brilliant craftsmen of story and terror alike, uniquely able to transform what might seem ordinary into something that is anything but. Couple that with the vision of a director like Vincenzo Natali and, on paper, the movie sounds great. However, in this circumstance, the pieces don’t quite come together and, while I appreciate the effort, it left me feeling flat on the whole.

There are many different perspectives and ways to look at the world that constantly surrounds us. Even if this particular film didn’t work for me overall, I must say: the next time I’m driving down the highway and catch sight of those long, swaying blades out of the corner of my eye…I think I’ll feel a shudder, not a shrug. There’s a lot of tall grass in the world and, frankly, I plan on staying out of of it.

Humanity is often driven by a collection of convictions passed on to them by those who came before; those who raised and guided them, those who loved them. These convictions — call them religion, superstitions, or whatever you like — burrow deep into the psyche, creating lasting associations between our beliefs and our behaviors that can damn as well as save. These associations affect the people we become, the decisions we make, and, ultimately, the consequences we reap.

The Lodge is a gorgeous, haunting film that depicts a family unit in decline, the children of two disparate parents regurgitating their emotions in cruel and demeaning ways. The bulk of the movie finds the children spending the Christmas holiday in a secluded, snowed-in lodge with their father’s new fiancée, a woman they harbor nothing but resentment for.

Directed by Severin Fiala and Veronica Franz, the team behind Goodnight Mommy, the film is carefully composed and photographed. Each frame serves to construct an ever-deepening feeling of dread, a darkness which mirrors the emotional decay of the people onscreen. The bleak, snowy setting and shadowy corners of the lifeless lodge become a character in a way, an imposing force representing a warm, welcoming place fallen to ruin.

At the center of the film is a performance by Riley Keough as Grace, a woman who was raised in a cult and abused as a child, forever followed by the mental programming that her father inflicted upon her. Desperate to find peace and family, Grace is a strong, sensitive, and genuine force in the film that cannot find a foothold amongst her new family’s emotional tumult. But it’s when such extremes collide that all that has been repressed on both sides comes erupting to the surface.

Belief and conviction can be given and they can be forced. They can change, and they can change again. The complexity of the human mind is not easy to unravel; once it comes apart, it’s something else entirely. The Lodge is a brilliant film which tracks such an unraveling, every element of its construction serving the greater whole and carrying the viewer to a place as dark and disturbing as what is buried in the recesses of its protagonist’s mind. It’s about decisions and it’s about consequences. Sewing and reaping. Repressing and believing…convictions notwithstanding.