As the final frames of the last movie flickered into blackness, I knew the end had come. No more screening slots to agonize over, no more seating assignments to lament, no more festival volunteers to high-five — Fantastic Fest 2019 was no more. But in those final hours, there was still celebration; movies to watch, love, and share with the world. That’s when an epiphany hit me. For if we keep talking about it, Fantastic Fest will never truly end, only live on in the hearts, minds, and souls of movie fans everywhere, for all time. And thanks to a particularly great lineup of films on the final day, I’ve still got plenty to say. 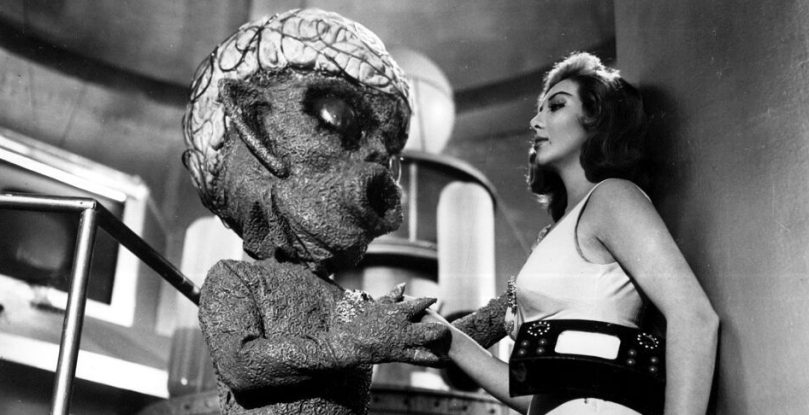 The Ship Of Monsters

One of the reasons I love genre cinema is the boundless level of creativity on display. Inside the realm of horror or science fiction, there are no constraints or limitations; imagination is the guiding force behind the logic and narrative scope of the picture.

The Ship Of Monsters, from prolific director Rigelio A. González, is a 1960 film that embodies the very best of that unfettered inventiveness. Supposedly put together by a producer who hoped to combine all of the top-grossing genre box office tropes of the age into one epic adventure, the film plays like a comical greatest hits compilation of American action-adventure and science-fiction cinematic tropes filtered through the cultural perspective of its director.

Concerning two beautiful women from Venus who travel the galaxy in search of male specimens to repopulate their planet, the film features alien monsters, a snarky robot, and a jovial, tall-tale-telling-and-singing cowboy who just can’t believe his luck. There’s a childlike joy on display in every frame, making the movie feel like a celebration of its kitchen sink approach rather than a cynical cash grab like the producer intended.

The film screened three times during the festival (more than any other) due to the sheer demand for it. I missed the movie the first few times around but made a point to attend on that final day due to sheer word of mouth. More than a few attendees even called it their favorite discovery of the festival, which is a testament to the fun, open-hearted approach this movie takes to its subject matter.

Whether you’re a seasoned sci-fi veteran or just on the cusp of discovering what you love about fantastical movies, The Ship Of Monsters is a wonderful, jubilant, and delightfully silly romp through some of the best aspects of genre cinema.

The divide that exists between the rich and poor goes far beyond material wealth. An invisible line separates humanity, affecting the ability of the haves to understand or even recognize the have nots. The groups live parallel lives, sharing the same cities and streets, yet each is driven by a morality shaped by subjective experience. The conditions of the poor are wholly unacceptable to the rich, and that’s the way it goes — until the subjugated class has had enough.

The Kim family — Ki-woo, his sister Ki-jeong, his father Ki-taek, and his mother Choong-sook — share a single dingy basement apartment where they scrape together a living by folding pizza boxes for a local delivery place. They love and support each other and try to keep their spirits up, but they feel trapped by their means. The ugly reminders of their station (such as a drunken man who regularly urinates on their window) serve to constantly prod and provoke, prompting the family to consider what they’re willing to do to get to the top.

Parasite, directed by Bong Joon-ho (The Host, Snowpiercer), attempts to answer that question, following a heist-like infiltration of the Parks, an incredibly wealthy family living in a mansion not far from the Kims’ modest apartment. Ki-woo lands a job tutoring the Parks’ teenage daughter and immediately begins formulating a plan for the Kims to take over all of the household roles (art teacher, driver, and housekeeper). The throw-caution-to-the-wind exploits of the devilishly clever Kims juxtaposes hilariously against the naiveté of Mrs. Park, a kind, simple woman who only wants to run the household as her relatively absent husband would like.

As the film progresses, however, the disparity between the lives of the rich and poor becomes increasingly frustrating to Ki-taek. As Mr. and Mrs. Park snuggle intimately in their lavish mansion during a calming rainstorm, the Kims struggle desperately to salvage their few prized possessions from sewage waters flooding their apartment. The Parks demonstrate a blatant disregard for the world around them and a lack of understanding for those below them (like the Kims).

Parasite is about what lies below the surface and how easy it is to ignore what you don’t have to see. The film is beautifully shot and put together, emotionally compelling, and engaging until the very last frame. There are plenty of surprises in store, some of which challenge not only the lack of empathy in the Parks but that same disregard which has become cemented in the minds of the Kims. The effects of class on society are complex and Bong Joon-ho is unafraid to examine them in a complex fashion.

The whodunit is a storied subgenre of great renown. So many wonderful storytellers and narratives have employed the twisting, turning corridors of the gothic mansion murder mystery over the years, providing the world with endless hours of entertainment spanning books, television, and, of course, movies. The question is what does Knives Out bring to this already bountiful table?

Benoit Blanc (Daniel Craig) has been hired anonymously to investigate the death of prominent author Harlan Thrombey (Christopher Plummer). The entire extended family was in town the night prior to celebrate Thrombey’s 85th birthday and, despite the trappings of a suicide, foul play has been suggested. Everyone is a suspect.

The story is familiar. The narrative thrust has certainly been done before. Still, there’s a modern inventiveness to the proceedings, a sharp sense of humor and biting wit that feel fresh in this setting and drive the story to some new and exciting places.

Directed by Rian Johnson (Brick, Looper), every element of the movie is stellar. Nathan Johnson’s score is engrossing. Steve Yedlin’s shadowy cinematography is pitch perfect. The cast — comprised of a bevy of fantastic actors like Jamie Lee Curtis, Toni Collette, Michael Shannon, Chris Evans, and Don Johnson — is superb. These components coalesce into an experience that reminds you why it can be so fun to go to the theater and give your mind over to a movie for a few hours.

Still, it’s Daniel Craig and Ana de Armas that make the whole movie work as well as it does. Craig’s dry, Southern drawl intermingled with de Armas’ genuine sense of anxiousness and concern provides the audience a window of empathy into the otherwise loathsome group of people with which the narrative concerns itself.

Ultimately, Knives Out does not reinvent the wheel when it comes to the classic whodunit, but it does rewire the audience’s expectations of one. Told in an inventive way, with surprises I doubt many will see coming, the film is a wonderful tribute and a worthy addition to a subgenre beloved by so many.